From 5 different ports, on the evening of August 18th the Allied flotilla heads to Dieppe, led by 2 teams of mine sweepers whose aim was to secure safe passage through the waters of the English Channel.

The barge transport craft disembark the landing barges and equipment into the water. Each group of barges head to the shore at 3:30am toward the site previously assigned to them, while the destroyers protect their flanks.

The group of 24 landing barges transporting Commando group n°3 who were to land at Berneval on Yellow Beach I and in Belleville-sur-Mer on Yellow Beach II to the east of Dieppe cross paths with a German flotilla coming down from the North Sea, provoking a substantial naval battle, and thus eliminating a much counted on element of surprise, and forcing the landing craft to scatter from their grouped formation.

Of the 24 landing barges assigned to the area, only 7 reach Yellow Beach II, and this, much later than planned: at 4:50am, disembarking only 20 Commandos instead of 120.

This small group of men, led by Major Peter Young succeeded in neutralizing the Goebbels battery after 2 hours of intense fighting, but sustained heavy losses. Still, the prize was huge as this particular battery represented an enormous threat the Allied naval forces. At 5:40 on Yellow Beach I, 124 Commandos, including US Rangers and some free French soldiers, under the orders of LT Colonel Durnford Slater. This group sustained heavy losses: 37 killed and 82 taken prisoner.

To the west of Dieppe, in Pourville at Green Beach, barges carrying 503 men from the Queen’s own Cameron Highlanders, under the orders of Lt Colonel Gostling, and 523 men from the South Saskatchewan Regiment, led by Lt Colonel Merrit land late and at the wrong spot.

The group of Camerons were to take an easterly course toward the village of Petit Appeville, to liase with the tanks which were to have landed in Dieppe.

This group reached Petit Appeville, but was forced to retreat faced with the arrival of German reinforcements. The Saskatchewan troops, whose mission was to neutralize the defenses surrounding the “Four Winds farm”, and to take the Freya radar station, needed to cross over a narrow bridge spanning the Scie River, leaving behind numerous casualties.

They only succeeded in cutting off the electrical power supply line for the radar station. Of the 1026 men who landed, 160 were killed, and 256 were taken prisoner. 610 returned to England, 269 of who were wounded during this mission.

The barges making up the n°4 Commando group make their approach up the beach, splitting into two groups, one landing in Vasterival at Orange Beach I led by Major Derek Mills Robert, the other on the beach at Ste Marguerite-sur-Mer at Orange Beach II, led by Lord Lovat.

These two groups have orders to destroy the heavy battery named “Hess” made up of six 155mm canons and other diverse types of arms defended by more than 150 German soldiers. This will be the only successful element of Operation Jubilee.

At 7:05am the heavy guns are sabotaged, the commandos lose very few men and are able to re-embark for Newhaven in the UK with two prisoners, after having incapacitated more than a hundred Germans.

5:06am Puys Beach: directly to the east of Dieppe

The initial wave of the Royal Regiment of Canada lands on the pebble beach, late due to the sea battle hindering their approach. It is now daylight and the wreaked surprise effect results in this wave being quickly decimated by enemy fire, forcing the Allied soldiers to shelter beneath a 4 meter high sea wall.

At 5:55 six barges carrying a company of Black Watch Highlanders drops a second wave of men who undergo the same punishment. It was on this tiny beach: only 200 meters long, well fortified and boxed in between high cliffs that the worst tragedy of Operation Jubilee unfolded.

In just a few minutes over 200 Allied soldiers lost their lives while another 289 lost their freedom as POWs. Of the 554 men who set foot on the beach, only 65 returned to Great Britain.

After the attack on the German coastal defenses by the Royal Air Force, the frontal assault on the Dieppe beach begins.

On the east end of Dieppe, named Red Beach, the Essex Scottish Regiment landed, while the Royal Hamilton Division landed on the western section, named White Beach, both under a deluge of bullets and shellfire.

The Royal Hamiltons were to take over the Casino. A severe battle ensued around this building. A few light units tried to penetrate into city center but were forced to retreat. The majority of the soldiers were trapped on the beach beneath the seawall.

The first wave of the 14th Calgary Regiment, equipped with the new “Churchill” tanks which were to be used for the very first time, disembark 15 minutes late under heavy shelling. They were neutralized by this fire and more importantly, the treads were destroyed by the rocky surface of the beach. Of the 29 tanks which landed on the White and Red beaches, only seven managed to cross over the parapet along the beach, advancing along the esplanade, from where they emptied their ammunition against the enemy defenses.

After seeing what happened to the first wave of Churchill tanks, the second wave didn’t disembark

Others which landed but stayed on the beach:

During the air assault by German airplanes on the Allied ships, the HMS Berkeley was bombed and began to sink. Luckily, her sister ship HMS Albrighton was nearby and picked up her crew.

In 2001 a team of divers from the G.R.I.E.M.E. (discovered by Mr Tamarelle) brought the ship’s bell up from the wreck. Once cleaned, it was on display for several years in the Dieppe city hall, then officially put on display on Nov. 17th, 2011 in the August 19th, 1942 Memorial museum, run by the Jubilee Association.

During this time, in the channel leading into the port

The gunship the “Locust” charges between the jetties aiming to take out the German barges tied up in the rear port. Afterwards the Free French submarine reconnaissance ships were to take and capture the barges, manning them with Marine Commandos, but the Bismarck battery fired on them with such intensity that the “Locust” had to turn back, abandoning its mission.

On board the “Calpe”, one of the eight destroyers carrying the command infrastructure, messages are received giving conflicting information.

General Roberts, commander of the entire Operation Jubilee, assuming that the Essex Scottish team had crossed the beach esplanade, decided to send out the Fusiliers Mont Royal, held in reserve, onto Red Beach. They in turn, would make landfall with their 26 barges, too far to the west at 7am, and would find themselves trapped on the pebble beach, and reap harsh casualties.

While no advancement was being achieved, General Roberts informed headquarters in England that re-embarkation should take place at 10:30, with if possible, sufficient air cover to protect their retreat.

But the Royal Air Force wasn’t available in that sector, so the retreat was pushed back to 11am. The extra half hour seemed an eternity to the soldiers trapped on the beach. Then at 11am, chaos reigned as they tried to re-embark on the landing craft now scattered all along the beach. And this under heavy German artillery fire.

Plumes of spray from the shells hitting the water and a heavy screen of black smoke further complicated their retreat.
In the sky above Dieppe, another air confrontation ensued, with a larger German force than at the start of the raid, with more extensive flak. Throughout the morning of the 19th of August, 106 Allied aircraft were shot down, numerous pilots disappearing into the sea. Some will have completed two missions, having returned to England to refuel, and others will have completed three missions. The Germans lost 48 planes. All totaled the Allied made 2617 sorties. 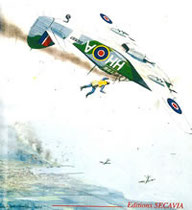 Columns of prisoners coming from Pourville, the Golf Course, Berneval, Puys and the port and beaches of Dieppe converge, surrounded by German soldiers on the grounds of the city hospital, where a triage of the wounded takes place. 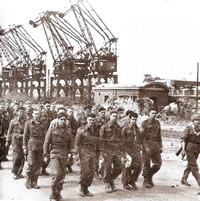 A large number will be evacuated, for the most serious cases to the Hôtel-Dieu in Rouen, 60 kilometers from Dieppe, where they will be taken care of by the nuns of the Augustinian Order. One of these nuns, Sister Agnès Marie Valois will have an exemplary attitude toward the German doctors. Because of her actions, The Veterans, after the Liberation, will bestow the name “the White Angel” on her, at each and every commemoration.

Sister Agnès was awarded the badge of Officer of the Legion of Honor, Knight of the National Order of Merit and of the Sérvice Méritoire Canadien in 1998.

In the days immediately following the arrival of the wounded in Rouen, 35 did not survive. They are buried in the St Sever cemetery on the left bank of the city.

The rest of the prisoners were marched on foot, some without shoes, to the train station in Envermeu, a village located some 13 kilometers from Dieppe. They were shipped in merchandise boxcars to the POW camps in Silesie, a province in Poland, occupied by the Germans.

During this trip, some of the prisoners escaped. For example, Lucien Dumais who managed to reach Marseille, then Gibraltar, served in North Africa, then returned to England in 1943 where he organized an escape network which benefitted some 307 British aviators.

Several weeks after being buried in the municipal cemetery in Dieppe, the bodies of the soldiers killed on the beach will be exhumed and moved to the Allied cemetery in “les Vertus” on the outskirts of the town. A parcel of ground reserved by Great Britain in 1939 was used.

Among the thousand or so graves are 707 Canadians.

A painful and tragic page of history, in the middle of WWII ends. Dieppe would bury 48 civilian casualties and bandage many more wounded.

In the days following the Raid, the German authorities let circulate the rumor that the citizens of Dieppe helped protect the city from the Allied invasion forces. To support this licentious propaganda, they decided to offer a monetary indemnity of 10 million francs to the city. This was refused by the elected officials of Dieppe.

In exchange, they suggested that the Germans should send back the civilian prisoners taken from Dieppe and the surrounding villages. On September 12th, 1942 a first convoy of some 984 prisoners arrived at the station in Dieppe, followed by another on October 23, counting 320 people.

Many important lessons were learned from this "forced" Raid. Diverse reports and accounts will allow mistakes to be corrected and new directives to be applied for the future invasion of lower Normandy in 1944.

The numerous deficiencies and mistakes accumulated throughout that fateful morning would be taken into account, reviewed and corrected. Of course the bottom line was tragedy for the Allied Units, notably for the Canadians, but their sacrifice will not have been in vain. Many years later, Dieppe will be considered as the first step on the path to freedom of Europe.

The 2nd Canadian Division which suffered so much on August 19th, 1942 got the green light to free Dieppe, and was allowed the honor of being the first soldiers to enter the city, finally closing a horrible chapter for their unit.